Hartpury Court was built in the garden of the old Manor House in the early 1880’s to a design possibly by Benjamin Bucknall, who built Woodchester Park, Gloucestershire for the Leigh’s, another Catholic family. No doubt much of the stone was salvaged from the old house and there is a three-light mullioned window, a door arch and the porch, which were clearly re-used. The Court is privately owned.

The development of agriculture and enlargement of the Abbey’s possessions in the locality during the 13th century meant that the Manor required storage in Hartpury. The barn, now incorrectly called a tithe barn was built during the 14th century to store all the produce from the manor, not merely the tithe. During the first part of the 16th century the manor was let, but responsibility for the repair of the barn and pigeon house remained with the Abbey, so the barn may not then have been let with the farm, but became used as rent in kind received by the Abbey. 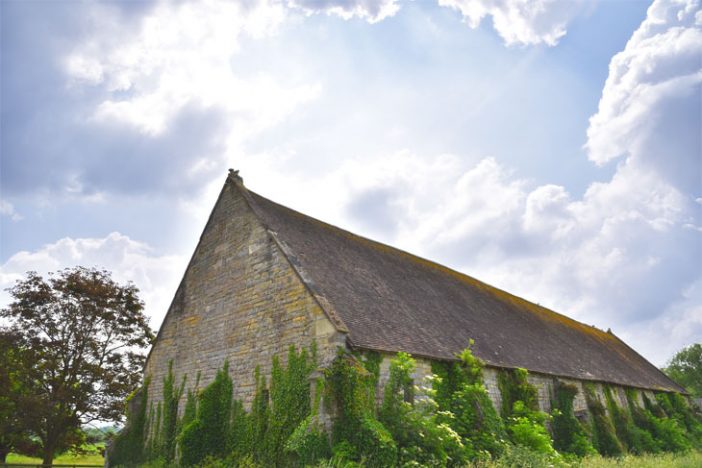 Measuring 161ft x 36ft, Hartpury’s tithe barn is one of the largest in Gloucestershire, and indeed, in the country. (Ashleworth 128ft x 30ft. Bredon 128ft x 30ft. Frocester 186ft x 34ft). At one end of the roof it has a winged dragon as a finial and at the other, a couchant lion – the English lion looks towards Wales and the Welsh dragon towards England. There are also finials over the two porches, one of which is broken, perhaps when the porch collapsed, as there is evidence of this having been rebuilt at some time.
The Tithe barn is privately owned. 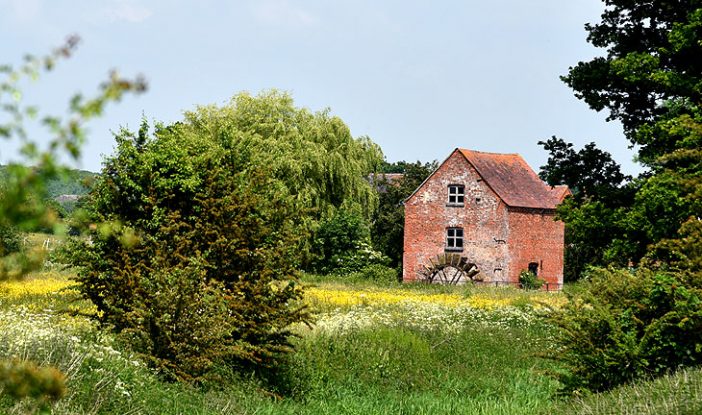 Early records are scarce, but the mill is shown on an estate map of 1669. In 1770 the mill was described as ‘three water corn mills covered with one roof.’ By 1919 it is described as being ‘a substantial building of brick and tile, with two 14ft undershot water wheels, three pairs of stones and a fireplace on the first floor, and six corn bins above.’ Only one wheel now remains.

Here also was probably the wharf, used by ships trading up and down the Severn. Fields nearby were known as le Backes, a term used to describe the area of land between buildings and the river, that was used as a wharf. In the 13th century, the abbey’s tenants made up a large proportion of all Gloucester’s market traders, no doubt making full use of river transport. Market records reveal that apples, pears and honey were brought for sale, largely from these west of Severn parishes. The Mill is privately owned. 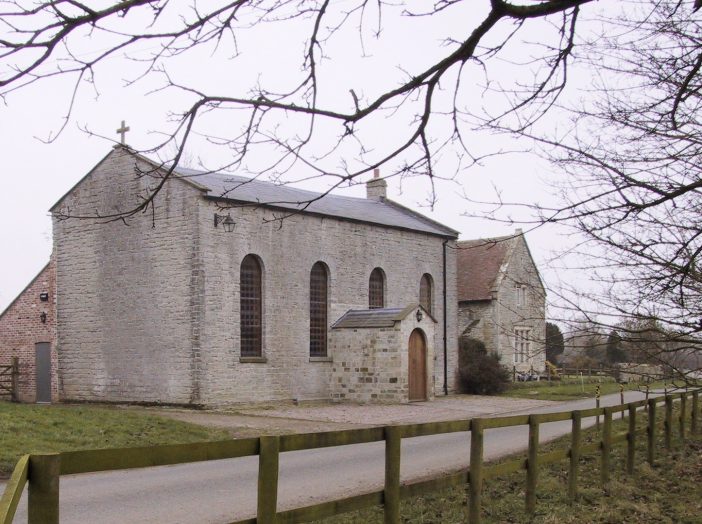 Owned by Hartpury Heritage Trust, and open to view from porch any day.
Available for hire. More information.

« The Manor of Hartpury