The Church now has a ring of 6. In 1544 it received a bequest from William Webb ‘To mayntance and reparacyon of the bellys 12d.’ The oldest bell today is the 4th (10cwt 0qr 14lb) cast by Henry Jeffries, who was a mid-16th century Bristol founder, in about 1550, presumably paid for out of the bequest. This is one of only 12 bells known to exist by this founder, and is by far his largest. The word “bellys” (plural), suggests Hartpury had at least two bells at the time.

Three of the remaining bells were cast by another early founder, John Pennington, whose surviving 29 bells show that he worked almost entirely in Gloucestershire and Monmouthshire. Two at Hartpury are dated 1626 – the 3rd (6cwt 3qr 3lb) and the 5th (12cwt). His third casting at Hartpuy is the tenor (14cwt 1qr 6lb), dated 1628. John Pennington is known to have cast the 11th at Gloucester Cathedral in 1626, his heaviest. Hartpury’s tenor , at only 4cwt lighter, is his second heaviest known.

The bells were rehung about 1850, by Isaac Gose of Newent who left space for a treble to make up a ring of six. 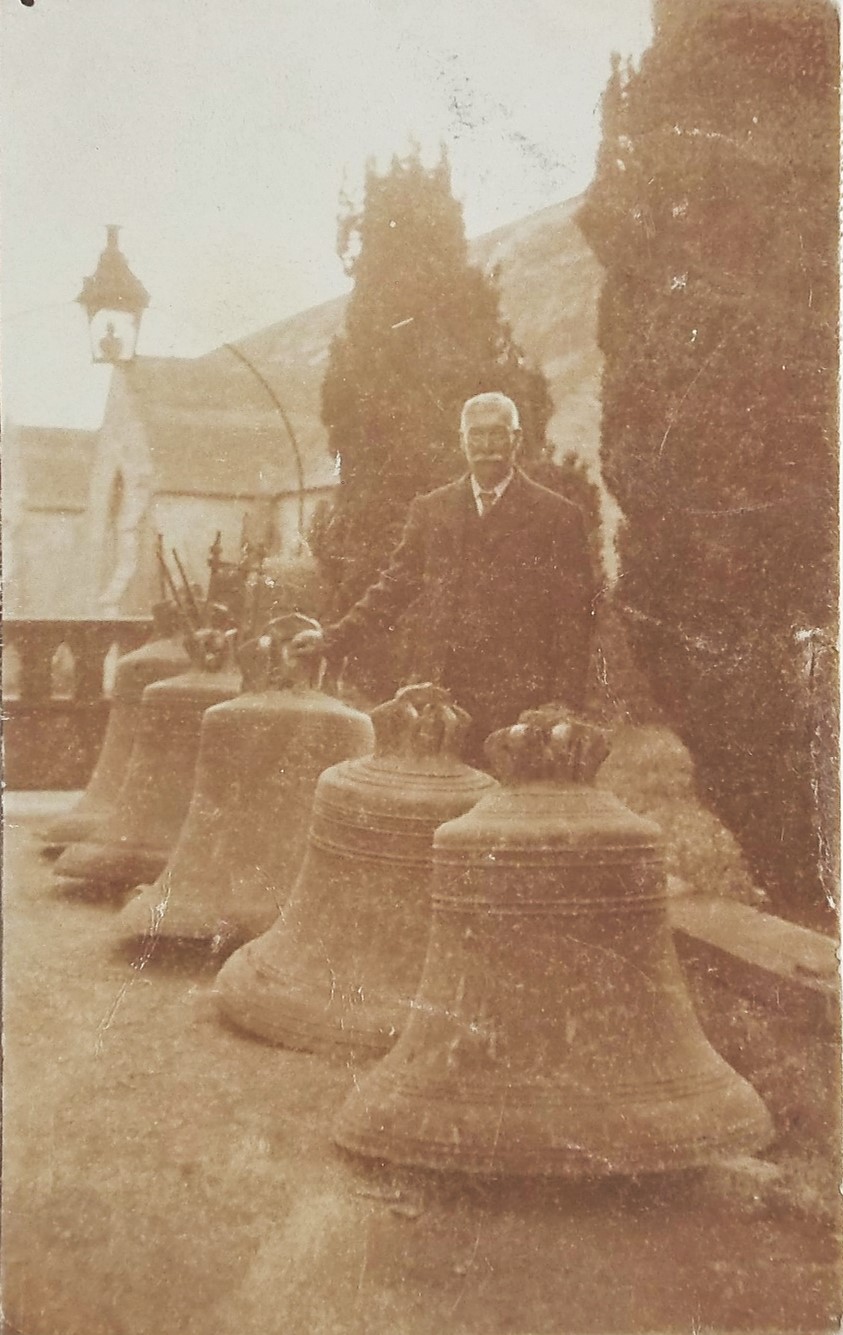 In 1901 an appeal for the sixth bell announced that the tenor was:  ‘A really grand bell for her weight, undoubtedly a recast of an older bell (without any additional metal to make up for waste) as she is two or three cwt lighter than she ought to be in proportion to the other bells, but notwithstanding this she is one of the very best bells in the country, and the whole of the ring if made up to eight bells would be equal, if not superior, to the grand ring at the Cathedral, the musical note being the same (E flat)’.

The appeal continued: ‘Last and least comes the treble, quite a youngster among her big sisters, but she is equal to them in tone, which is not to be wondered at as the A.R. on her denotes that she came from the celebrated foundry of Rudhalls at Gloucester. She is very lonely with an empty cradle by her side. When may we expect to see a little stranger to swing in it? ’ It was not until 1926 that the ring was augmented to six by the addition of a treble, (5cwt.1qr.4lb) cast by Gillett and Johnston of Croydon, who at the same time recast the original 2nd bell by Abraham Rudhall I in 1715.

There is an interesting unusual tombstone in the churchyard recording in 1692, that the local blacksmith John Hale was crushed by a bell. It has an inscription about bellringing. See Memorials.