From Anglo-Saxon times bees were kept in skeps, initially of wicker, but later of coiled straw. For protection from the weather, some form of covering had to be provided. A ‘hackle’ or bundle of straw gathered together at the top by an iron ring was often used.

The Domesday Book recorded that Gloucester annually paid 12 sesters (24lbs.) of honey to the King, and market records from 14th century reveal that the trade in honey came principally from west of Severn parishes. Hartpury has a long tradition of bee keeping. In 1260 some of the tenants held land in return for payments of honey and there are fields that are still known as ‘honeylands’.

In less protected areas, recesses or boles were built into cottage walls and the skeps were put in them. Much has been done by IBRA and in particular by Dr. Eva Crane and Penelope Walker, to trace and record these structures. They found that a few cases of freestanding structures had been built, whose only purpose was the protection of the skeps. These they called bee shelters. They were generally small and very simple three sided structures, however in one unique case a far larger and highly decorative example was found, and it is this Bee Shelter rescued by Hartpury Heritage Trust, that stands in Hartpury’s churchyard.

Many theories have been advanced to explain why a Gloucestershire stonemason should have erected such an extravagantly large and decorative a structure in his garden. It has been suggested that the Bee Shelter was built to order, which for some reason was not fulfilled. Supporting this theory, there is some evidence that it was not originally intended for Tuffley’s garden, but had been reduced in size to fit there. The repossession of his home by the mortgagee would be explained if an intending purchaser had defaulted on payment.

A second theory is that the Tuffley family may have intended the Bee Shelter as an advertisement for their business. In the 1840s, when they supplied stone for the new Houses of Parliament they faced fierce opposition (which eventually prevailed) from, ironically, Caen in Normandy. A structure such as a bee shelter might well have been prepared as an exhibition piece illustrating the versatility and suitability of Cotswold stone for that contract, or for one more local such as the building of Woodchester Priory or Woodchester Park, that remarkable unfinished Victorian country house nearby, which was first planned in 1845.

The explanation may be even simpler. In 1832 Paul Tuffley appears on the polling list living in Nailsworth. His father, also Paul, lived at Nags Head, Avening, where there is an intriguing set of bee boles contained in a window seat, with the entrance holes concealed in the decorative carved stone head of the main doorway. 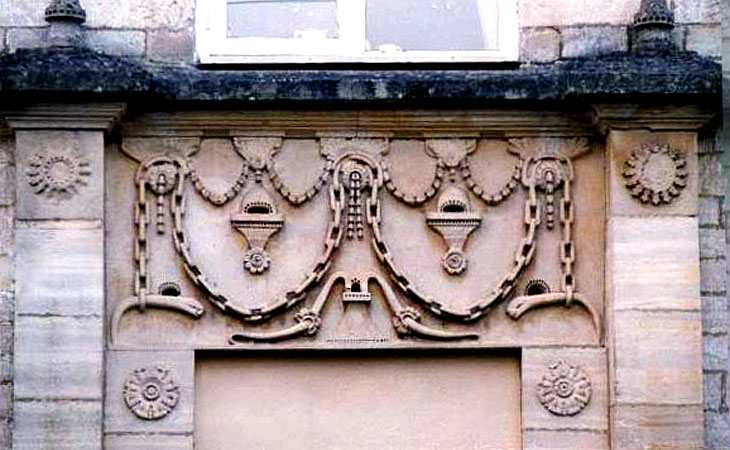 Was a beekeeping son merely seeking to eclipse his father’s earlier work when he constructed the extraordinary Bee Shelter now in Hartpury churchyard? We may never know!

Following the loss of his house, Paul Tuffley left Nailsworth and moved to Paddington, London, which was then the centre of the stone trade – block stone being brought there by rail. London trade directories show he headed a masonry business but it is not known how successful it was. He died in 1873 aged 72 after a short bronchial illness.