There are many interesting trees in Hartpury’s churchyard, some of which were probably planted at the end of the 19th century to be a feature in the landscape seen from Hartpury House. A survey was carried out in 2010, and the numbers refer to the plan. The fruit trees are covered separately.

1. 2. 15. 16. 17. 28:
Standing out and massively impressive are five of the Wellingtonias or Giant redwood Sequoiadendron giganteum. The Wellingtonia was first introduced to this country in 1853, from the western slopes of the Sierra Nevada in Central California. There, 3000-year-old trees were felled, and the basal slice, showing the growth rings, exhibited in museums as curiosities. They were planted in many private estates, including at Hartpury House and in the churchyard. The largest tree there has a girth of 493cm measured at 150cm above the ground, and a height of 31 metres. The average annual ring width is estimated to be 6mm., so in 2010 its age was calculated as being 130 years, meaning the likely date of planting is 1880, and early photos seem to agree.

3. 6:
Leyland cypress x Cupressocyparis leylandii. A large fast growing intergeneric hybrid evergreen tree commonly grown in the late 20th century for hedging, but here grown into fine trees. The original green clones were produced spontaneously in Northern Ireland in 1870, and Wales in 1888, where the parent trees – Cupressus macrocarpa and
Chamaecypress nootkatensis were growing adjacent to one another in ornamental conifer collections.

4. 7. 10:
These are flowering cherries Prunus cv. In Japan, cherries have been cultivated for thousands of years in temples and palaces, and today cherry blossom festivals known as hanami are held all over Japan during the spring.

9:
Near the gate is a Holly Ilex cv. that suffered badly from an oil tank fire in 2016.

11:
A Chinese arbor-vitae Thuja orientalis cv. Native to North and West China and Korea and cultivated elsewhere since ancient times. A tree of wet ground in high rainfall areas. The silvery blue cones each have six pointed scales that ripen to red brown before shedding seed. The wood is used in Buddhist temples both for construction work, and chipped, for incense burning.

14. 25:
Lawson cypress Chamaecyparis lawsoniana cv. Native to Oregon and north-western California, it was introduced to Europe in 1854. The foliage gives off a rather pungent scent, not unlike parsley. The wood is light yet has great strength and rot resistance. In Japan it is in high demand for making coffins, and for shrines and temples.

19:
Overhanging the wall behind the Garden of Remembrance is a Field maple Acer campestre, the only maple native in Britain. Trees can be long-lived, up to 500 years; often growing on wood boundaries and ancient hedge banks.

20:
A Hawthorn Crataegus monogyna. A spectacular sight in spring when covered in white blossom. It is also called the ‘May tree’ because of this display – appropriately growing within sight of May Hill, where May Day celebrations are held. A valuable source of nectar and berries for wildlife, some ancient trees are 500 years old and have survived because of folklore and superstition obliging county people to respect the tree.

22. 23. 24. 26. 27. 30:
All Common yew Taxus baccata, although the clipped yews in the churchyard are Fastigiata – a female clone discovered in Ireland in 1780 and much favoured for topiary. 27 is the largest yew tree in the churchyard. It has a girth of 348cm measured at 70cm above the ground and a height of 13 metres. The annual ring growth is estimated at 3.3mm giving (in 2010) an estimated age of 336 years, with the likely date of planting around 1674. The survival of the Sloper memorial under this tree, dating from 1703, can probably be attributed to the protection from weathering provided by its branches, although the tree was nearly the cause of the monument’s destruction, when its roots undermined and penetrated its joints, requiring extensive restoration work in 2004. Capable of attaining great age the yew is often an indicator a pre-Christian use of a religious site, although there is no evidence that this was the case at Hartpury. The neighbouring home farm, now a part of Hartpury College, was once called Yew Tree farm and there are a number of yew trees growing along the lane from the present village centre to the Church.

29:
This is a Highclere holly Ilex x altaclerensis, an artificial hybrid first produced in England in the 1890s. This female tree is probably the cultivar Wilsonii.

Finally, overhanging the northern end of the churchyard, behind the row of perry pears, is a Horse chestnut Aesculus hippocastanum, a native of the forests of Southeast Europe, but long known here for its conkers! In Germany, they are commonly planted in beer gardens, to protect the cellars from the summer heat. Horse chestnuts have spreading, dense canopies but shallow roots which would not intrude on the caverns. The practice of serving beer at these sites evolved into the modern beer garden, so perhaps our tree’s location between the perry pears has some justification.

Extracted from the report of Terry Merchant, Chartered Forester M.Arbor.A , commissioned by the Revd Rob Merchant, 3.7.2010 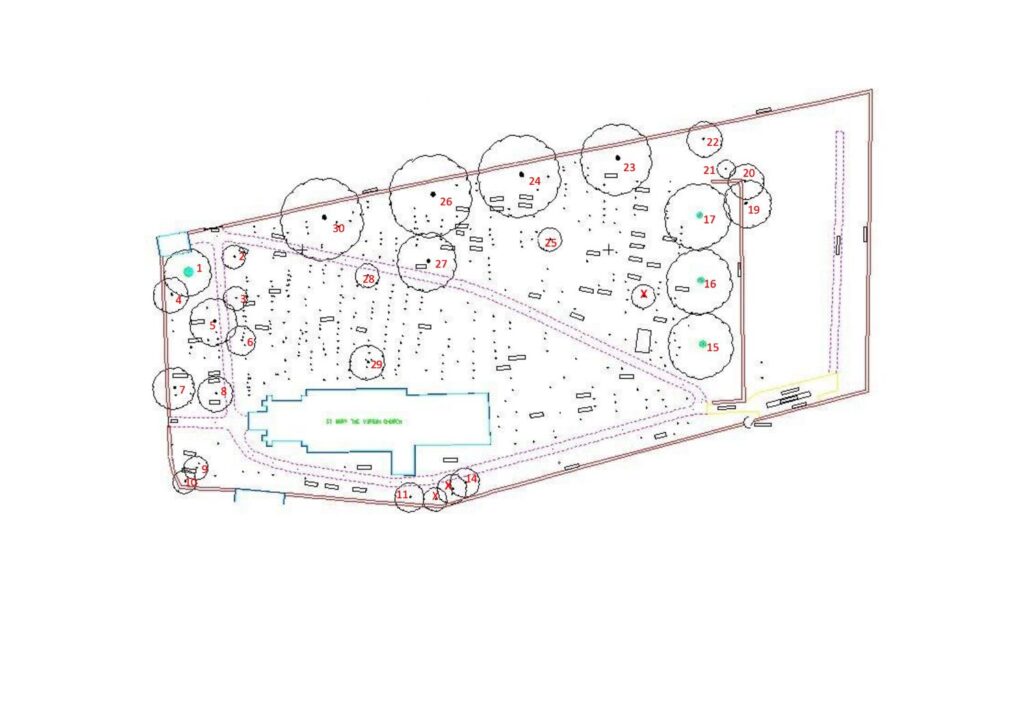