In 2001, Staunton and Corse Ranger Guide Unit assisted by Hartpury Heritage Trust surveyed the milestones on roads running through the local parishes.

Recording began in mid-winter, with some milestones easier to find than others, but perseverance and clippers resulted in most surviving ones being traced before the spring growth of the verges made it more difficult. All stones were measured and photographed and their location recorded using by map reference and plan. Many were found to be inaccurately marked on the Ordnance Survey map of the area – some that were marked no longer existed and a few were found that were not previously recorded.

Some had additional marks, such as a trig point. Other marks were photographed and recorded, even if their meaning was not immediately apparent. Foundry marks were often found on an iron milepost. Damage was noted, as well as earlier repairs.

One milestone was found to have been uprooted. The County Council soon re-erected it when this was drawn to their attention. 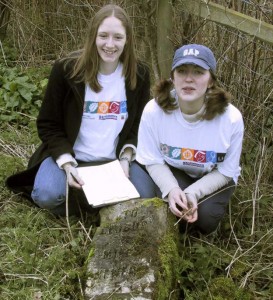 Hartpury Heritage Trust arranged restoration of another, assisted financially by grants under the Heritage Lottery Fund Local Heritage Scheme and from the Forest of Dean District Council.