Look back through the mists of time to the dawn of the World – to a day when the immortals were feasting on May Hill near Newent, on the border of Gloucestershire and Herefordshire. One brought a pear which he described as the elixir of life, providing a nectar fit only for gods. He handed it to the chief, who took a large bite. A perry pear is so dry and astringent as to be virtually inedible. This he discovered – spitting the pear all around the hill. His companions explained that the pear must be crushed and the juice turned into perry, but the damage had been done, those pips took root and flourished – the perry pear had entered the mortal World. 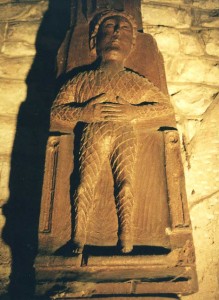 It is for this reason that even today it is said that a perry pear tree will flourish best if it is growing within sight of May Hill.

High up in the roof of the church in the village named after the perry pear – Hartpury, there is an ancient carving of a figure seated on a throne with a pained expression clutching his belly – could he be that same immortal – still suffering from that ill-advised bite into the perry pear!

The true native wild pear growing in British woodland and hedgerows is pyrus pyraster. It is now one of our rarest trees. The cultivated pear, pyrus communis, originated in central Asia evolving through a process of natural selection through many millennia. It was introduced here by the Romans. Following their withdrawal, orchards would have been abandoned, but self-sown pyrus communis seedlings would have appeared and crossed with the indigenous pyrus pyraster. These crosses – often referred to as wildings, are thought to be the ancestors of the native perry pear. The village name ‘Hartpury’ is derived from the Saxon word for the pear: Hardepirige – hard pear tree that is one with hard fruit, like the wilding or perry pear. 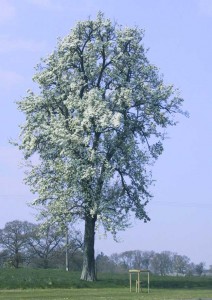 Hartpury was one of the largest manors belonging to the Gloucester Abbey. In the 13th century, market records reveal that the abbey tenants formed an important proportion of Gloucester market traders. Produce brought to market included apples, pears (presumably warden or culinary pears) and honey. By 1388 the first culinary pear variety, the Warden, had been introduced by Cistercian Monks at Wardon in Bedfordshire. The Black Worcester is a variety of warden pear. Culinary pears were an important source of vitamin C in medieval England. They were one of the few foods that could be stored through the winter before the introduction of the turnip and other root crops. One of the attributes claimed for the turnip when it was eventually introduced in the 16th century, was as a replacement for apples to make cider! A drink sometimes referred to as perry had been made from the early medieval period by steeping slices of the fruit in water (depensé) to produce a liquor that was then allowed to ferment. It was drunk as a penance by the early religious!

Harris, fruiterer to Henry VIII, introduced many dessert pears from France and the Low Countries in 1533. Worcester monks spoke of using both wyld peres and grete tame peres (the Black Worcester) for perry. The use of Warden pears for perry was also recorded in the London area, a trade that John Norden (1607) found to be declining due to growth in the fresh fruit market, but the introduction of the numerous continental dessert pears meant large quantities would have had to be turned into perry, if a local market was not found for the fresh fruit. Rev. John Beale (sometimes referred to as the father of the Hereford orchard) was a cider man, regarding perry as a women’s drink ‘fit more for the hinds’. Possibly this was because the perry he knew was generally made from surplus dessert pears. On 10th February 1619 a dispute was heard in the Bishop’s Court between the vicar of Hartpury, Thomas Rudgeway, and Richard Nelme concerning the latter’s refusal to pay tithe on 300 bushels of apples, 200 bushels of pears and £4 worth of cherries. Fruit growing was clearly well established in the parish, but until the late 18th century growth of the industrial Midlands and the improvement of transport, there was no market for the fruit itself other than a fairly limited market for the fresh fruit in Gloucester. Most would have been converted into cider and perry. 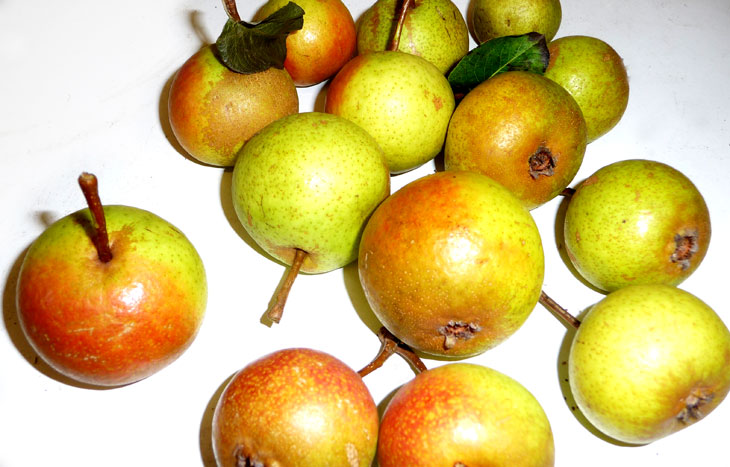 The perry pear may be considered a halfway point between the wild pear and the sweet dessert pear. Its complex pedigree is the key to the unique drink now made in the counties surrounding May Hill. Gerard refers to wild or hedge pears as being harsh and bitter, but used for making perry. By 1662 distinct varieties of these pears were recorded by Daniel Colwall writing about the part of north-west Gloucestershire around May Hill ‘… it is pears it most abounds in, of which the best sort is that they name the Squash pear, which makes the best Perry of those parts’. He continued: ‘The pears for perry are the Red Squash pear esteemed the best, the John pear, the Harpary [Hartpury] Green pear, the Drake pear, the Green Squash pear, the Mary pear, the Lullam pear.’ 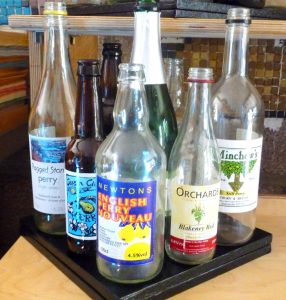 Perry is one of the traditional fermented drinks in Britain and was of considerable importance to Hartpury. Writing in the last quarter of 18th century, William Marshall recorded considerable cider and perry making in the ‘Over Severn’ parts of Gloucestershire and Herefordshire around May Hill, and Rev. Thomas Rudge, reporting to the Board of Agriculture at the end of that century, found that large quantities of cider and perry were made in Hartpury, and that the Hartpury Green pear produced a perry so alcoholic as to be inflammable!

From these early origins in the villages around Newent and Ledbury, many local varieties were produced. Trees grown from seed were generally used. This local practice continued through the centuries. John Nourse Morse of Newent produced copper tokens (to pay his workforce) that bore the legend ‘several thousand young healthy and fine crab apple and pear stocks raised from the kernel to be sold by J. Morse Newent Gloucestershire 1796’.

Once the trees came into production the fruit was assessed and either kept or, if unsatisfactory, the trees were top grafted with a proven perry variety. This resulted in the development of many local varieties which were often restricted to individual parishes or even farms. Perry pears were also often planted on waste or other land not suited to cultivation, by cottagers and smallholders.

While the cider apple is widely grown throughout the West Country, the true perry pear is still found largely in Gloucestershire and Herefordshire and to a lesser extent Monmouthshire, Worcestershire and a few other neighbouring counties.