The Development of the Manorial Settlement at Hartpury

The comment in 1922 by Alfred Watkins, in Early British Trackways, that many British roads were as ancient to the Romans as the Roman remains are to us, is very true at Hartpury, where the village owes its existence to just such tracks. Recent archaeological investigations suggest an Iron Age settlement to the south of the parish. It was this part that later became known as Morewent. The name is thought to derive from the Celtic maro and Romano-British venta, meaning ‘great market’, which raises the possibility that it was a trading centre beside the river Leadon, close to the lowest crossing point of the River Severn at Gloucester. From Morewent, one road passing near the present church led eventually to Hereford, while another, possibly continued up the hill to Overton and Woolridge and then to Upton-on-Severn and Worcester. A third settlement, Lassington, lies on the opposite bank of the Leadon.

The manor of Hartpury comprised a number of settlements or hamlets (called ends), which were originally clearings along the tracks through the marshy wooded area known as Corse Chase. The 11th and 12th centuries were times of agricultural expansion to feed the growing population, and it was then that most of the land in Hartpury would have been cleared and ploughed. In 1123 King Henry I accepted the monk’s ownership of their newly ploughed ground in Hardpyrie, that was once part of ‘Corse Forest’. An extent of the Abbey’s possessions, dating from the period 1260-70, confirmed that the main settlements existed by that time: Moor End and Morewents End to the south, the centre of the village around the church, and Butters End. To the east a branch went through Corse End to North End and then on to Ashleworth, while the track continued through Blackwell’s End to Lampers End. 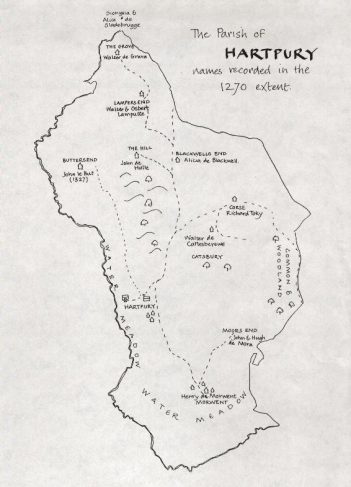 There it branched to Corse, Tewkesbury and Worcester to the east, Upleadon, Newent and the Forest of Dean to the west, and north to Ledbury, Malvern and Hereford. Hartpury’s importance as a centre of communication is emphasised by the service required from some medieval tenants to transport salt from deposits in Droitwich to the abbey in Gloucester.