In 1551, following the dissolution of the monasteries, Walter Compton of Chalford Place, Bisley, acquired the Manor of Hartpury and altered the abbot’s manor house to make a dwelling more suitable for a Tudor landowner.

The Compton’s wealth was derived from the woollen trade and their fulling mills. The manor was clearly the principal holding in the parish, but may not have been the only one. A smaller northern estate was by 1583 occupied by James Poulton and had possibly been a separate manor since the dissolution. There was also an estate to the south, based on the Domesday settlement, and occupied since at least the 13th century by the Morewents who took their name from it. 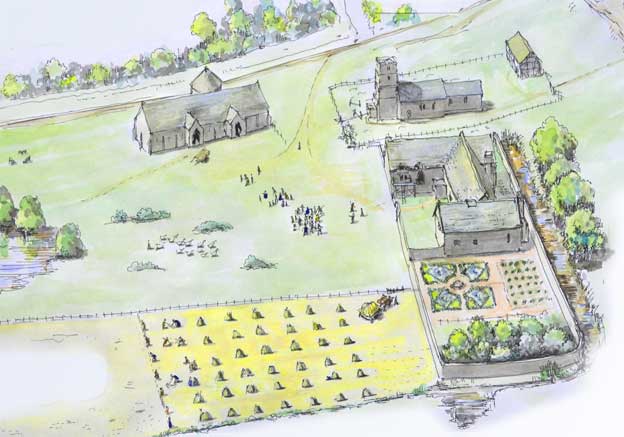 On 22nd August 1642 King Charles raised his standard at Nottingham, and the Country was plunged into Civil War. The civil administration of Gloucester then covered not only the city, but also the hundreds of King’s Barton and Dudstone, which included Hartpury. In July 1643, Bristol fell to the Royalists, and the siege of Gloucester began. The Royalist commanders tried to blockade the City by garrisoning the surrounding towns and villages, while the defenders matched them with their own fortified outposts, one being Hartpury Court. The effect these troubles had upon Hartpury is perhaps best shown by the record of burials in 1643. In normal years the average number was about a dozen. In that year 33 were buried, many women and children, whose deaths were probably caused by deprivation and starvation. Many Civil War era musket balls have been found in the fields around the church.

The principal manor was still occupied by the Comptons at the start of the Civil War. The then Lord of the Manor had recently married Mary, the daughter of Thomas Habington of Hindlip, Worcestershire – a catholic family. Following his marriage Walter adopted the Roman Catholic faith, but his grandmother, who continued to occupy Hartpury Court, presumably remained a Protestant. This would explain why the manor was not forfeited even though it came under the control of Puritan Gloucester.

The southern manor belonged to John Madock, an alderman of Gloucester. Madock was one of those empowered to raise money by the sequestration of the estates of ‘malignants, delinquents and papists’ to help pay for ‘raising and maintaining of Horse and Foot for the Garrison of Gloucester and for the County of Gloucester’. The northern manor continued in the hands of the Poulton family, whose sympathies, being merchants with interests in London, Gloucester and Tewkesbury, were likely to be with Parliament.

The accession of James II placed catholics in a more favourable position and in 1686, William Compton, Walter’s son, was made a baronet. The respite was short-lived and the anti-catholic riots in Gloucester, in the wake of the declaration of William III as King, saw Hartpury Court attacked by the mob, the chapel destroyed and the house plundered.

In 1721 the Comptons inherited the Hindlip estate in Worcestershire and Hartpury became their secondary residence. As a result it remained largely unaltered although poorly maintained. The squire of Hartpury was Sir William Compton (2nd baronet). In a return compiled by the Clerk of the Peace at that time, Sir William, his Lady and a servant were declared papists. The estate is not however mentioned in the Register for Popish Estates kept under the Act of 1715.

Sir William apostatised to obtain relief from double Land tax but his children were evidently brought up as catholics. In 1731, within three months of his inheriting Hartpury, the 3rd baronet registered the Manor as ‘Papist’, and presumably suffered the double taxation charged on property belonging to catholics. When the 4th Baronet died within two years of his father, the estate had become heavily in debt. Walter, the heir and 5th baronet, eloped to Scotland when only 16 in 1765. He died without issue in 1773, aged only 24 and the Baronetcy expired.

Jane, a daughter of the third Baronet, married John, second son of Thomas Berkeley of Spetchley, a catholic family. Their eldest daughter Catherine married Robert Canning, a staunch liberal, who became High Sheriff of Gloucestershire in 1832. Following his wife’s early death, Robert remarried and had two daughters, Maria and Frances. Maria married protestant Patrick Robert Gordon, who by Royal Licence assumed the name of Gordon Canning. The Hartpury estates were partitioned between the two daughters. Maria died in 1887 and Patrick her husband in 1893. Their eldest son Robert sold the estate to his brother William. He had married Clara Crawshay Bailey, heiress to a wealthy iron master from South Wales, who set about acquiring all the estates in Hartpury, although it was not until 1908 that almost all the parish came into one ownership.

In 1919 William and Clara Gordon-Canning, unable to become reconciled to the changes brought about by the War sold the majority of the Hartpury Estate, in many cases to their tenants.

« Abbey of Gloucester
Buildings around Church »