The organ is believed to date from the first half of the 19th century, but there are no records of its history before it arrived at Hartpury in 1899, gifted to the church by Mrs Gordon Canning of Hartpury House. Opinions differ as to whether it was originally one or two manual, but if one, then it must have been substantially rebuilt and the soundboard replaced before it came to Hartpury, (pictured here before the late 2004 restoration) when the specification was recorded as: 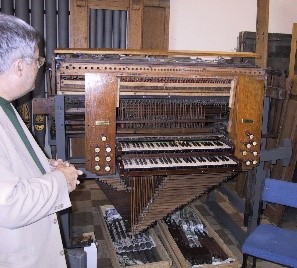 Trevor Tipple of Worcester undertook the work. church 16 MED In 2004 his firm completely dismantled, repaired, cleaned and rebuilt the instrument. At the same time the opportunity was taken to undertake certain modifications intended to give the organ the brighter sound that would have been apparent prior to the 1926 work.The specification after the 2004 rebuild: 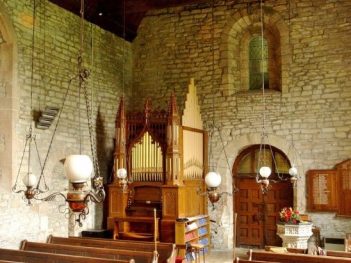 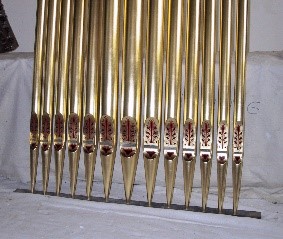 The decorative front pipes were regilded church 18 SM using 23½ carat gold. Designs in red and black were found on the pipes, underneath bronze overpainting, and these designs were recreated on the newly gilded pipes.

« The Bells
The Chancel Screen »